A year ago I was asked to make a pair of royal medieval female shoes with plenty of decorations. The period I was asked to reconstruct was 13-14th century. I did a lot of research on medieval female shoes on the Balkans but could not find enough evidence and images of a good model to recreate. The only thing that I found good enough to recreate was based on a wall-painting from the 12th century monastery of St. Pantaleon in Gorno Nerezi, Macedonia. The monastery was built in 1164 at the time of Emperor Manuel I Komnenos, needless to say – the area was owned by the Byzantines at the time. The Byzantine shoes on the wall-painting seem to be low, with a string around the ankle or a decoration. Also, the face/top of the shoes seems to be decorated with floral motives that can either be gilded gold, or embroidery. However, since the customer wanted decorated shoes with embroidery, I had to make them like that.

The goal of the reconstruction was to make a nice pair of medieval female shoes for a time period that is after the 12th century, but since I could not find anything else with decorations, I decided to use this model. Even though there are later depictions of royalties, the shoes they wear are either not visible (due to time and damage,or painter’s decisions), or they are just too difficult to decipher and can’t be reconstructed with precision.

My first pair of decorated shoes were covered with silk and embroidered over, but since this pair doesn’t seem to have textile covering it, I decided to do the embroidery over the leather. I used a pair of threads made of all natural linen which I bought from a medieval merchant in Grunwald, Poland, and had been dying to try out. As the work moved along, I realized that the threads are not really strong enough to last. They started exhibiting signs of deterioration, so I continued with great care, and this is the result: 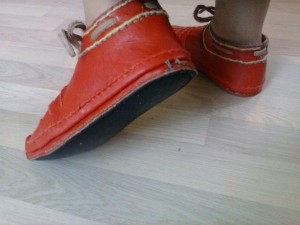 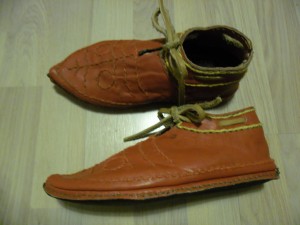 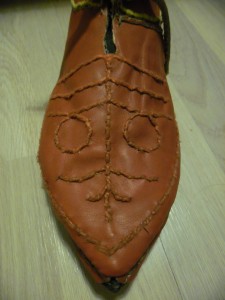 Overall, this was a good experiment in making embroidered shoes. It’s not my best work, and I wish i had better threads, but considering the difficulty of the project i think they turned out good.

PS: Keep in mind that these shoes are more or less speculative!!! – They are based on only one depiction. Also, they are not strictly for women. The depiction doesn’t show what kind of person is wearing them, so it’s safer to conclude that it’s a man. However, my customer was a girl, so I made them smaller.