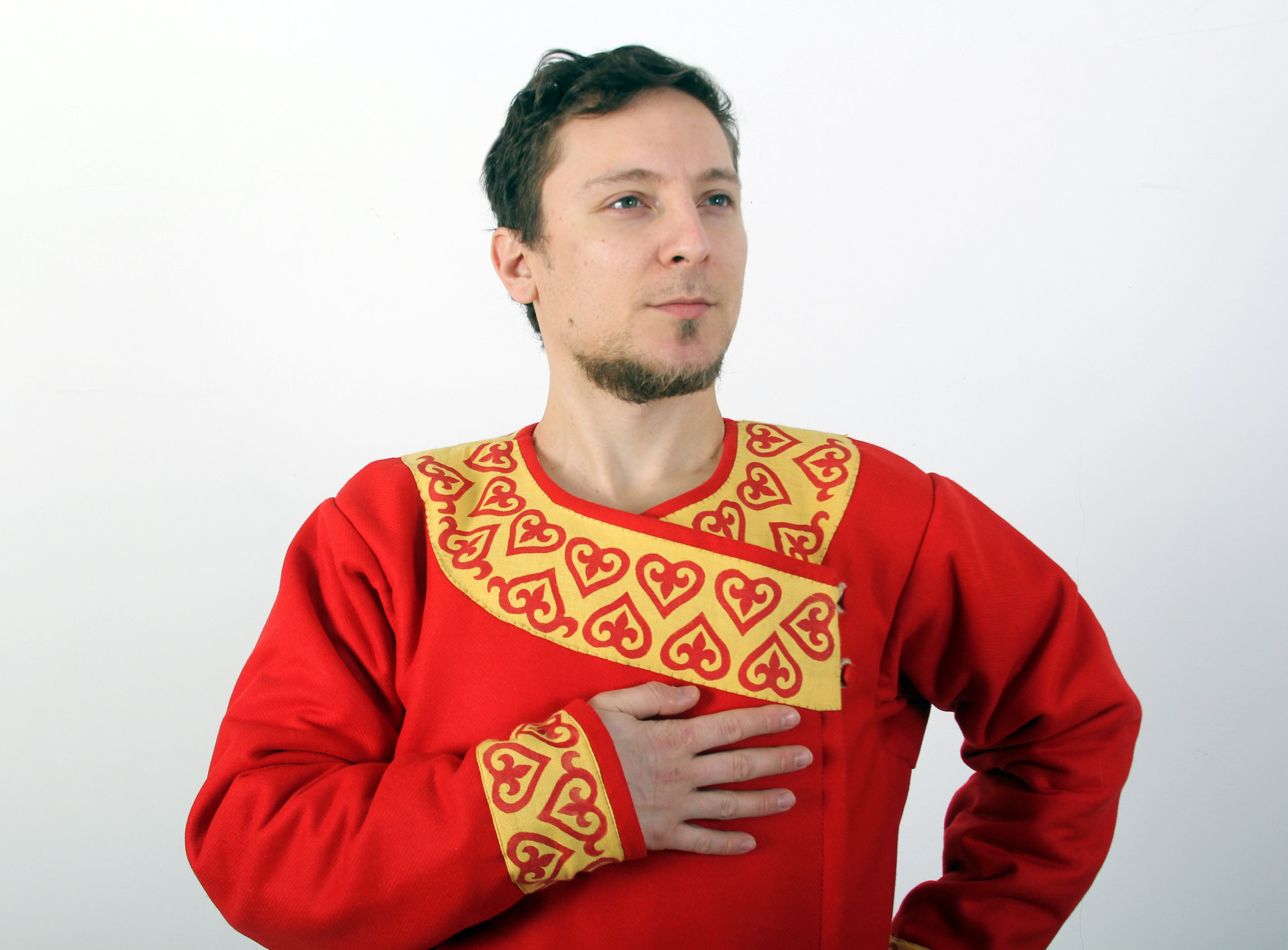 Today we present to you a reconstruction of a padded tunic based on
14th century depictions from the Balkans . This garment is meant to provide a basic level of protection for arms, torso and upper thighs. It is designed to be worn with a maille shirt on top, additional protectors for lower arms and legs, as well as a thick stuffed gambeson for the torso.

While researching 14th century murals from churches and monasteries on the Balkans, we noticed a specific model of tunic being used in several different ways – as a civilian garment, as a tunic that goes under the armor, and as a tunic that might be worn above a set of armors. In the case of St Demetrius from Marko’s monastery (Figure 1), we believe there is additional armor under the tunic.

However, in figure 2, we see St Demetrius riding into battle with an escort of angels bringing him his arms and armor. Starting from the left to right on the arch – the first one is carrying what seems to be a set of leg protectors; the second one has a hat and an armor made of metal plates; the third one brings him his bow and quiver; the fourth has his sabre and his kettle helm; the fifth – has a kite shield, and the sixth has his gauntlets.

There are additional two depictions of soldiers that aren’t saints, who wear the same garment. In one scene it’s the king’s guard or servant, and in the other scene is a guard or soldier preparing for an execution. Both images are from Marko’s Monastery. This lead us to believe that this was a garment worn by common soldiers, and not something specific to St Demetrius or the church rules for depicting saints.

Furthermore, we noticed that a similar outfit is worn by the king’s armsbearer in a scene from Staro Nagorichino (present day Macedonia), which was built by the Serbian King Milutin in 1313.

After considering the model and structure of the garment, we went to work. We knew that a padded tunic like that needed to be both comfortable to wear and able to offer a basic level of protection. That’s why we decided to use 8 layers of cotton as a foundation, with an additional layer of thick red wool for the outside. To design the pattern and make it as mobile and as comfortable as possible, we used contemporary clothing designs.

Seeing how well the padded tunic was turning out, the customer decided to add decorations to the garment and after a couple of long days of stamping, we managed to decorate the rims of the padded tunic with beautiful hand-stamped prints in classic Balkan fashion.

Upon finishing the Balkan style padded tunic, we took it our for a test drive and into the photo center for some higher quality pictures. So far the tunic fits well, it’s quite firm and offers a decent amount of protection.