The Medievalisticals team is proud to announce the completion of our first pair or roman shoes! 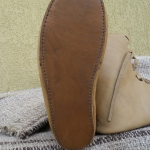 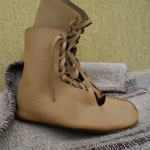 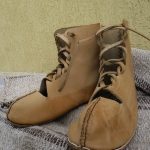 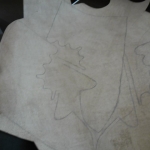 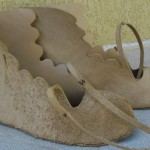 As an experienced medieval shoemaker, I’ve made more than 20 pairs of medieval shoes, but never any roman footwear.

This type of roman shoes is based on archaeological finds from the 5th-6th century. The calcei are a part of a roman military costume that we were hired to recreate for a very interesting local museum in Bulgaria. The museum is based in the municipality of Samokov and it serves as an exposition for archaeological finds from the near roman fortress Belchin. I’m not sure this is the historical name of the place, though.

Roman shoes are very different from medieval shoes. They are more  complex and in my personal opinion unnecessarily complicated. First – they are not sewn on the inside and flipped inside out like medieval shoes(it’s a bit more complicated), and second they have a double sole and hobnails. That makes walking with them extremely comfortable. I know that because i tested my double soled boots recently at medieval camp Cherven. As you may see our example of roman footwear doesn’t have hobnails on the sole, that is because the museum didn’t want hobnails. Besides, the boots will be worn by a mannequin dressed with lorica hamata, scutum and everything a 5th century roman legionnaire could need.  So a hobnailed boot may cause some damage to the floor, especially with the weight of the weapons and armor.

We hope you like our work and if you have any questions, or want to place an order with our medieval shoemaker, you can reach us here – https://www.facebook.com/Medievalisticals?ref=hl