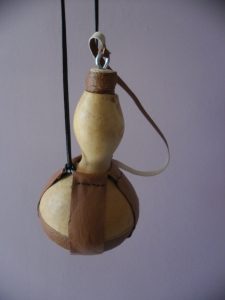 week a couple of dried gourds fell in my pocket and i decided to make medieval canteens out of them.

So far this was my third attempt. The first failed and became a bowl, very successful bowl actually. The second attempt was a success, made a good big bottle with capacity of some 2,5 liters.

This time the gourds were different – small and cute.

So at first I cut the top open and pour out the seeds and the filling. Then I put small sharp pebbles and some water in and just shake the gourd until all the insides fall out and everything is clean. After a good half an hour of shaking I managed to do that. At this stage I noticed that these gourds have very thin walls and the first gourd had cracked in the middle. Naturally I tried to be more careful with the second one, but it was even weaker and broke in two. It was a shame… but on the other hand I managed to fix the first. I melted some honey-wax and warmed up the gourd in the oven and when the fruit was warm enough I poured in the hot wax and shook it around to cover the whole inside. Luckily the wax sealed the crack and although weak the bottle survived. It looks a bit beaten up,  but after all it`s a pilgrim`s bottle.

In the end I added a tap and leather straps to hang it over my shoulder, filled it with water and now we wait to see if I`ve done my job well. 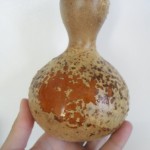 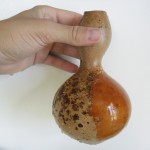 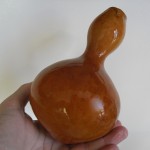 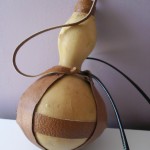 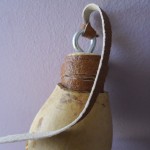 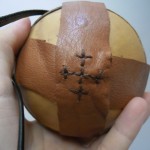 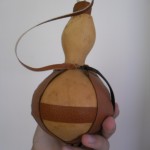 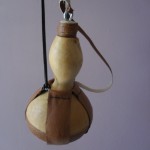 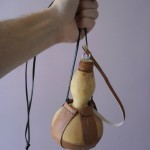 5 thoughts on “A Pilgrim`s Gourd Canteen”